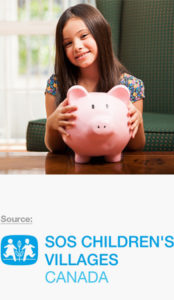 Despite growing interest in children’s financial empowerment, articles on teaching children about savings and investment tend not to highlight socially responsible choices.

A certified financial planner, Ms. Johnson found that in her experience many peoples’ poor financial habits are learned in childhood.

As such, children should learn the importance of setting both long-term and short-term goals, remembering the need to save and budget. Parents can influence their children’s perspectives on money, for instance, by continuing to give them money beyond their regular allowance simply because they spent all they had.

Children need to know that there is no such thing as a never-ending supply of money – bringing to mind the old adage, “money doesn’t grow on trees.”

Ms. Johnson also teaches the basics of investment. She tells her students that it is a good idea to invest in companies they understand, to avoid the pitfalls of investing in companies about who’s operations they know little about.

In a recently published article, The Atlantic warns that the homo economicus (economic man) is “a functional psychopath” willing to “lie, cheat, steal, even murder, whenever it serves his material interests – a man (or woman) who can be seen in economic and corporate arenas. Thankfully, the article goes on, most of us are “prosocial,” willing to sacrifice some personal gain to avoid hurting others and follow ethical rules.

But, in order to make these small sacrifices so that our counterparts in other areas of the world can enjoy their human rights, we have to do our research – research beyond what companies merely appeal to us.

To illustrate, Dr. Samantha Nutt, founder of War Child, writes in her new book, Damned Nations, “All but two provincial teachers’ pension funds are invested in one or more of the world’s top one hundred arms producers.” The Canada Pension Plan is invested in 24, despite Canada’s engineering of the Mine Ban Treaty of 1997!

In Dr. Nutt’s words, “we are consumers of war.”

According to the report, Canadian Socially Responsible Investment Review 2010, Canadian assets invested according to socially responsible guidelines totaled $530.9 billion as of June 2010. SRI funds have also been on the rise over the past 15 years, though they remain a “niche market”.

According to the UK-based charity, Stewardship, as per their website, “Children have never had so much disposable income… We all have a responsibility to model a right attitude to money. That’s why we link here teaching children with the tricky issue of the ethical use of money.”

Credit.com News: How Much Can Removing One Negative Item Raise Your Credit Score?

May 17, 2017
By Brooke Niemeyer Having a good credit score is important, whether you’re looking to finance a new home or simply get better terms on a new credit card. But sometimes…
Read More

May 18, 2007
By Donald Jay Korn June weddings follow May invitations to happy ceremonies. You may even be planning nuptials for June of next year already. Whatever timetable you’re on, careful planning…
Read More

August 2, 2017
By Ellen James Martin All across the nation, baby boomers age 60 and above are grappling with a thorny choice: should they renovate the family home or sell and downsize? Downsizing sounds like…
Read More